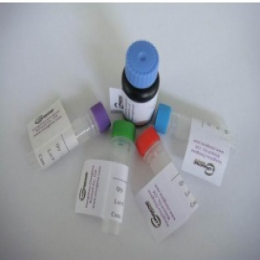 Description:
MUC1 is a large cell surface mucin glycoprotein expressed by most glandular and ductal epithelial cells and some hematopoietic cell lineages. It is expressed on most secretory epithelium, including mammary gland and some hematopoietic cells. It is expressed abundantly in lactating mammary glands and overexpressed abundantly in >90% breast carcinomas and metastases. Transgenic MUC1 has been shown to associate with all four cebB receptors and localize with erbB1 (EGFR) in lactating glands. The MUC1 gene contains seven exons and produces several different alternatively spliced variants. The major expressed form of MUC1 uses all seven exons and is a type 1 transmembrane protein with a large extracellular tandem repeat domain. The tandem repeat domain is highly O glycosylated and alterations in glycosylation have been shown in epithelial cancer cells.