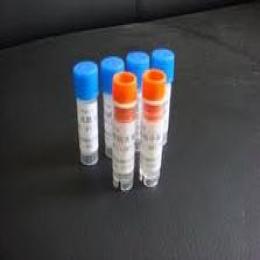 Description:
Angiopoietin-related protein 4 is a protein that in humans is encoded by the ANGPTL4 gene.
This gene is a member of the angiopoietin/angiopoietin-like gene family and encodes a glycosylated, secreted protein with a fibrinogen C-terminal domain. This gene is induced under hypoxic conditions in endothelial cells and is the target of peroxisome proliferation activators. The encoded protein is a serum hormone directly involved in regulating glucose homeostasis, lipid metabolism, and insulin sensitivity and also acts as an apoptosis survival factor for vascular endothelial cells. The encoded protein may play a role in several cancers and it also has been shown to prevent the metastatic process by inhibiting vascular activity as well as tumor cell motility and invasiveness. Decreased expression of this protein has been associated with type 2 diabetes. Alternatively spliced transcript variants encoding different isoforms have been described. This gene was previously referred to as ANGPTL2 but has been renamed ANGPTL4.