Nitrilotriacetic acid (NTA) production and use 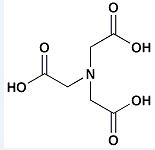 Nitrilotriacetic acid (NTA) is the aminopolycarboxylic acerbic with the blueprint N(CH2CO2H)3. It is a colourless solid that is acclimated as a chelating agent, which forms allocation compounds with metal ions (chelates) such as Ca2+, Cu2+, and Fe3+.
This admixture is commercially accessible as the chargeless acerbic and as the sodium salt. It is produced from ammonia, formaldehyde, and sodium cyanide or hydrogen cyanide. Worldwide accommodation is estimated at 100 thousand tonnes per year.