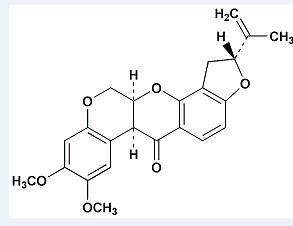 Rotenone is used as a pesticide, insecticide, and as a nonselective piscicide (fish killer).
It is commercialized as cubé, tuba, or derris, in single preparation or in synergistic combination with other insecticides. In the United States and Canada, all uses of rotenone except as a piscicide are being phased out.
Rotenone has historically been used by indigenous peoples to catch fish. Typically, rotenone-containing plants in the Fabaceae family of legumes are crushed and introduced into a body of water, and as rotenone interferes with cellular respiration, the affected fish rise to the surface in an attempt to gulp air, where they are more easily caught.
Small-scale sampling with rotenone is used by fish researchers studying the biodiversity of marine fishes to collect cryptic, or hidden, fishes, which represent an important component of shoreline fish communities. Rotenone is the most effective tool available because only small quantities are necessary. It has only minor and transient environmental side effects.
Rotenone is also used in powdered form to treat scabies and head lice on humans, and parasitic mites on chickens, livestock, and pet animals.
Rotenone has been used as an organic pesticide dust for gardens. Unselective in action, it kills potato beetles, cucumber beetles, flea beetles, cabbage worms, raspberry beetles, and asparagus beetles, as well as most other arthropods. It rapidly biodegrades under warm conditions, so harmful residues are minimal. A light dusting on the leaves of plants will control insects for several days.